Construction of “resilient” condominiums considering the prevention and reduction of disaster

As Japan continues to be hit by large-scale typhoons and earthquakes, the call is growing for disaster-resilient housing.

This section traces Haseko Group’s measures against disaster through the years and highlights the activities of Disaster Resilient Technology Working Group aimed at promoting the “construction of disaster-resilient condominiums.”

Located right on the typhoon corridor, the Japanese Archipelago has been victim to its calamity since old times. However, in recent years we are more severely and frequently hit by strong winds and heavy rain due to the worsening of global warming. In light of the earthquake recurrence interval, the Nankai Trough Mega Earthquake and the Tokyo Inland Earthquake are believed to be imminent, giving rise to an urgent call for public and private preparedness.

Since its early days, the Haseko Group has been taking steps to counter natural disasters. For example, we established our own seismic design standards for condominiums in 1977, ahead of the national standards. Below is the overview of the Haseko Group’s efforts over the years.

Prompted by the increasing severity of natural disasters, the Haseko Group established the Disaster Resilient Technology Working Group at the end of 2018. The WG laid out concrete measures in the following year and have since been putting them into action.

In 2018, western Japan was hit by a series of large-scale disasters including the Northern Osaka Prefecture Earthquake in June and Typhoon No. 21 in September. In the wake of these events, our technical staff members in Kansai surveyed the state of damage to the properties constructed by Haseko and set out to create a system for a higher level of disaster response. Survey results were put together by December of the same year when the Disaster Resilient Technology Working Group (hereinafter WG) was established as a collaborative body of design, construction, and technological promotion divisions, including members from Tokyo. 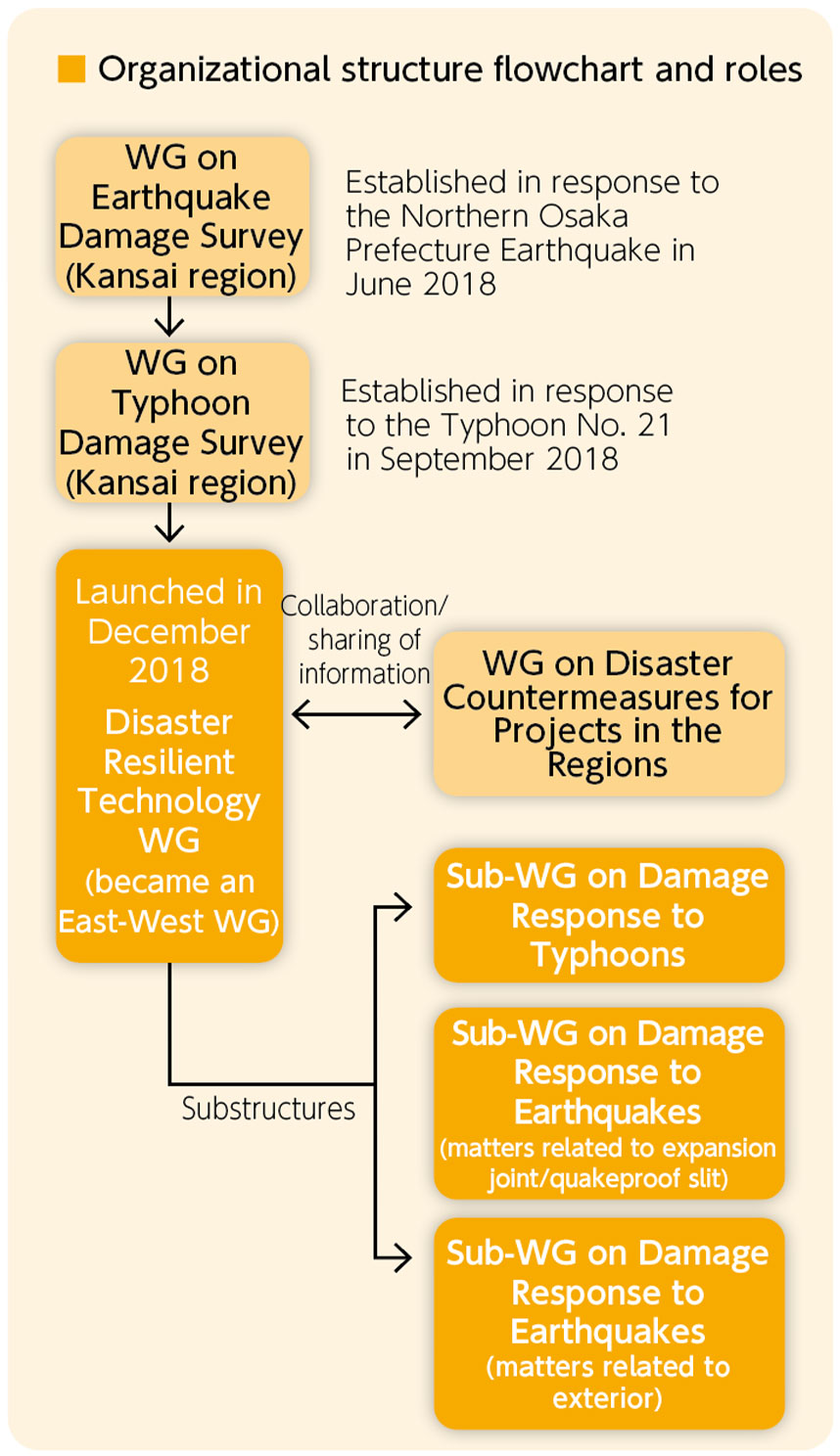 Based on the damage survey results, we have clarified problems in the existing rules regarding design and construction and started to reflect improvements in new construction projects. For example, to ensure that residents can continue living in the same condominium with a sense of security, we have revised the basic specifications for the strength of balcony partitions between units. Believing that the existing strength required by the Building Standards Act was insufficient, we raised the resistance requirement of the partition from that of the law, namely, to stand a strong wind that may occur “once in 50 years” to “once in 100 years.” Moreover, we refurbished the proposal of disaster countermeasures that we had presented to developers and residents’ associations in the past into the Proposal of Hazard-resistant Condominium and we are promoting the specifications’ adoption. Regarding the Disaster Response Manual, one of the contents of the proposal, we plan to encourage its application not only to new construction projects but to existing properties such as the for-sale condominiums and rental apartments under our management.

There are two aspects to disaster countermeasures, namely, “disaster prevention” and “disaster mitigation.” As we move forward in the face of increasingly severe natural disasters while preparing against unpredictable hazards, the “disaster mitigation” efforts, or how we can minimize damages, will become particularly important. However, we believe that it will not do to randomly top up provisions, but rather, we should carefully select the right measures for each property in view of its location and other conditions.

Building condominiums that promise safe home and secure life—that, no doubt, is the key to upholding the new brand image of the Haseko Group. As members of the Disaster Resilient Technology WG, we are committed to doing our part in solving social problems, while adding to the corporate value of the Haseko Group, through our continued efforts in introducing new technologies, making good use of our expertise, and delivering resilient living environments.

It takes a dual approach to protect residents from disasters and raise the value of the condominium, namely, an approach through hardware within each unit and in common space and the software approach concerning the management and operation works aimed at stabilizing residents’ life after disasters. Taking such arguments into account, the WG refurbished the existing proposals on disaster prevention/mitigation measures targeting developers and residents’ associations to work out the Proposal of Hazard-resistant Condominium. The proposal is built around the three basic policies of “physical safety during disasters,” “maintenance of living conditions after disasters,” and “building the management and operation systems.”

Regarding indoors, we suggest the installation of wall foundation to prevent furniture from falling and the use of quakeproof latches to fitted storage units, among others. For common space, we propose that a disaster response headquarters be set up, in addition to the installation of three-piece set disaster prevention equipment (emergency potable water generation system, emergency manhole toilets and benches that convert into cooking stoves), which has been a part of the Company’s basic specification for large-scale condominiums since 2006.

In terms of management/operation, we prepared the Disaster Response Manual aimed at raising disaster awareness. We present the proposal to project owners and, if accepted, prepare a manual dedicated to each property, complete with hazard map of the area, and provide it along with advice to the residents’ association and residents on a continuous basis.

Damages to a building would mean a huge loss to the residents who purchased a condominium unit as their precious assets. To prevent this, we reviewed the design/construction standards so as to minimize damages to the buildings that earthquake or typhoon may cause and reflected it in the Haseko Basic Specifications.

Take, for example, the expansion joints that connect condominium blocks. In the past, damages to the metallic parts of a joint cover had been inevitable because each block moves in a different direction in an earthquake. But the WG managed to develop a cover that will not break or fall easily during an earthquake or strong wind in a big typhoon by increasing the cover’s movement capacity while maintaining its strength. This was then incorporated into the specifications after countless discussions among the design, construction, and technological promotion divisions.

We are focusing our efforts on damage prevention by reviewing various specifications and adding new items to them to produce, among others, a ceiling material for entrance eaves that endures strong wind, a fastening method to prevent the shattering of photovoltaic power generation panels, and a construction method that minimizes damages to the building in case of earthquake.

We revised our Manual on Typhoon and Other Extreme Weather Events in 2020 to further ensure safety on the construction sites. The manual sets out primary to tertiary systems depending on the extent of damage caused by the typhoon or the predicted level of damage, enabling swift actions in instructing the site about responses or in exchanging information with partner companies. We drew up the Illustrated Guide to Typhoon Countermeasures, in which inspection/confirmation procedures required at each construction site for each of the systems are explained at a glance, in order to ensure information sharing and improved efficiency at all sites.

We also published the Natural Disasters and its Countermeasures which puts together the Haseko Group’s efforts in response to past natural disaster events, measures and approaches we have in store against future disasters, as well as the above information. We are thus formulating and compiling the Haseko Group’s efforts which will help in actual execution of measures and their further improvements. In addition to having in place these measures against natural disasters, we are working to maintain good site management at all times to stay prepared for any contingencies.

Aiming to protect the residents, buildings and facilities from disasters, our building management Group companies have been implementing disaster countermeasures as part of condominium management.

In the event of a predictable disaster such as a typhoon, the moment the area is forecast to be in the storm zone, we set up a disaster response headquarters, which directs the branches to prepare against the disaster, works along with the OWL24 Center (a comprehensive monitoring center owned by Haseko Community, Inc.) to answer calls from residents around the clock, put together safety status and local information, and instruct responses. Additionally, the Alert Information that we post at the condominium premises is updated, based on our experience in dealing with disasters that are growing in severity with the years and incorporating advice from the technical division of Haseko Corporation, and publish notices and disaster preparation instructions targeting residents and life managers (custodians).

The building management Group companies, under the banner of “disaster prevention and disaster preparation,” are working to cover not only prevention of disasters but also preparation against disasters as their task. To this end, we are proactively proposing safety measures for buildings and facilities, sharing and utilizing the technology and know-how unique to the Haseko Group. Furthermore, mutual support among residents and with neighborhood associations, etc., becomes crucial in times of emergency. For this, we have been continuously providing safety support by building communities in which members help each other (mutual aid). We will also apply the Disaster Response Manual, which was prepared for newly built for-sale condominiums, to existing properties and thereby further enhance the disaster awareness in the condominiums, and draw on the strong ties between the residents’ association and the management company to be well-prepared against emergencies.

Haseko Reform Inc. has been offering seismic diagnosis/retrofit design/retrofitting as part of its efforts in seismic upgrading, and have conducted a total of 305 such works to date.

As a first step in seismic upgrading, a seismic diagnosis is conducted to diagnose and analyze whether the building’s seismic resistance meets the new standard. In cases where the seismic resistance is diagnosed to be insufficient, it provides seismic retrofit design and undertakes retrofitting works. Since works take place while residents stay in their units, it makes it a point to communicate well with the residents and control noise. Haseko Group will continue its efforts in seismic upgrading in order to deliver a safe and secure living.

An example of out-frame reinforcement

Grasping the state of damage

To be able to quickly grasp the state of damage to the properties and facilities under Haseko Group’s management in the event of a disaster, we are running drills for the “primary confirmation of damages to properties”—as part of the BCP drill assuming a major quake—in which all staff and management confirm the state of damage to properties under construction/under our management/on lease, elderly facilities, apartment units on show, and our real estate brokerage outlets, etc., and enter the information into a map system. In the fiscal 2019 drill, we succeeded in confirming the state of 6,014 properties/facilities, or 84.7% of the total of 7,103 properties/facilities.